We understand that parents will have concerns and questions in the days after a baby boy’s circumcision. The staff in our Vancouver clinics is here to help.

Please see the detail below for information on how to care for your baby post-circumcision, and do not hesitate to contact us with any concerns that you feel require our doctor’s attention.

How to care for your son in the first 24 hours following the circumcision:

For your peace of mind, our doctors are available 24 hours a day on their personal cell phone. All clients are given contact information so they can reach our doctors directly 24/7 should any concerns arise.

Although the circumcision takes under 1 minute, you will be at the clinic for about one hour and fifteen minutes in total so that we can carefully review with you all post procedure care and answer any of your questions.

Healing is usually rapid and occurs in several stages. Remember that a circumcision is like any other cut. There are many factors that influence healing; but most importantly, every child heals differently.

First, the cut edge seals and bleeding ceases within minutes, hours, or even over the course of an entire day. The area just behind the glans (especially the underside) will become swollen. This inflammation will subside within a week or two. In the first two days, there may be an off-white or yellowish, patchy appearance of the glans. These patches are a type of scab and are associated with normal healing.

After a few days the area where the skin was cut look green and yellow. This is NOT pus. It is healing tissue. It can took this color for up to two weeks after the circumcision.

You will also notice that the glans appears red and glossy sometimes purple. This is because the skin covering the glans of an uncircumcised penis is mucous membrane (like the skin inside your cheek). 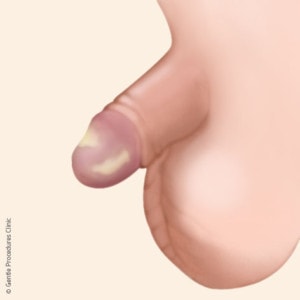 You will notice yellow patches on the head of the penis as it heals. This is not infection and is in fact a normal part of healing 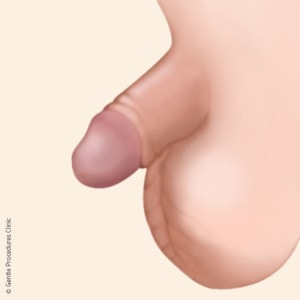 You will notice the head of the penis can often be purple, blue or red. This is all normal.

.A common concern for parents is aesthetics. Remember that penises come in all shapes and sizes. While most penises “look normal” within days of the circumcision, some do not take on a “completely normal appearance” until after the penis starts to grow. For example, there may be more mucosal tissue on one side compared to the other; this is a normal anatomical variation after circumcision that will resolve with time after your son grows older.

You will notice a mucosal ring at the base of the penis head. Sometimes it is more prominent on one side than the other. This is normal and no cause for concern.

Furthermore, although the penis may appear smaller after circumcision, it is not! This appearance is mostly due to the relaxation of skin surrounding the penis, which prior to circumcision holds the penis more erect.

After a few days to week, some parents notice swelling of the mucosal tissue behind or under the head of the penis and believe it looks “like a blister”. This type of swelling is normal. It is not a blister, and it will gradually subside. On occasion, a poor aesthetic result occurs when too little or too much skin is removed, or more likely when the cut edge of the skin attaches too high or too low along the length of the penis. The latter is sometimes caused by the presence of a hydrocele or penile erections.

In nearly all these cases, the penis will heal properly, and, in time, take on a normal appearance. If you are concerned in anyway about the appearance of your son’s penis, please call to consult with one of our doctors immediately.

Frenulum – Band of skin underneath the penis

Sometimes parents come to us worried about a band on the bottom of the penis fearing that it needs to be cut. This band is called the frenulum which carries the frenular artery and is normal (see image). It is similar to the band under the tongue (the part that is cut in some babies with tongue-tie).

You may notice a band on the bottom of the penis after circumcision. This is normal and no reason for concern 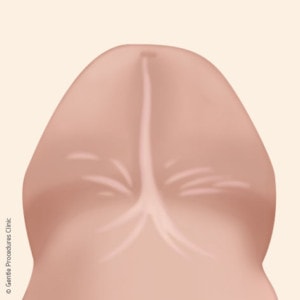 The gauze is very sticky and hard to pull off.

It is normal to use some force to pull off the gauze bandage. To make this easier, you can soak the gauze with warm water and Vaseline before pulling it off. In the end, you just may have to pull a little more firmly to get it off.

When you take off the gauze, there is some bleeding.

A small amount of bleeding is normal. Take some gauze with Vaseline on it and squeeze the bleeding area of the penis with your fingers for two minutes.

The entire Vaseline gauze around the penis falls off before 24 hours.

This is not important. Reapply a gauze pad with Vaseline and place it on the penis until the 24 hours is up. Then, just use Vaseline as instructed for about four days.

Try to clean it as best as you can using soapy water and then rinse it.